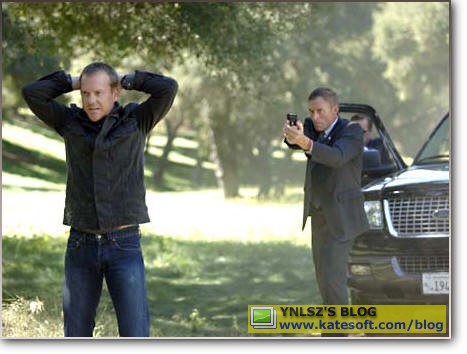 12:00 P.M.
Buchanan and McGill are hesitant to arrest Cummings. Jack intends to go directly to Novick, who can be trusted. Since Jack no longer works there, the plan won’t backfire on CTU. McGill gives in with the stipulation that Jack doesn’t make this revenge for Palmer’s death.

12:02 P.M.
Audrey apologizes to Jack for being so distant. It will take time for her to get used to seeing him alive.

12:03 P.M.
Cummings cannot confirm whether Jack is dead, but Nathanson says that the nerve gas is on its way to the port.

12:04 P.M.
The yellow tie man and an accomplice named Schaeffer arrange shipping the canisters to Moscow.

12:05 P.M.
Logan is furious that Martha hasn’t been found yet. He is shown a video made by the terrorists to show how the nerve gas causes permanent nerve damage within minutes. Yet the nerve gas stolen from the airport is far more lethal than the one in the video. Novick excuses himself when he gets a text message from Jack. Cummings watches him nervously, wondering if it’s news of Jack’s death.

12:06 P.M.
Novick calls back Jack, who says he has a lead on the nerve gas but that he wants it kept secret from the President. Novick is alarmed when Jack adds that it concerns Cummings. Novick agrees to meet him.

12:07 P.M.
Jack tells Diane and Derek that he needs to stay on to help CTU. Diane knows that Jack isn’t coming back to her, and she asks if it’s because of Audrey. Jack says that he is still in love with Audrey even though he doesn’t know if she feels the same way. He kisses Diane goodbye.

12:09 P.M.
Cummings and Nathanson listen to the playback of Jack and Novick’s phone conversation. Nathanson blames Cummings for not getting the job done inside CTU. He orders Cummings to kill Jack when he comes to the retreat.

12:14 P.M.
Secret Service Agent Pierce finds Martha in the stables on the property. She pleads with him to help her because they are setting her up. She says that someone inside the Administration is trying to shut her up because she knows the truth. The other agents come in to apprehend her.

12:17 P.M.
Inside the freight unit container, Schaeffer secretly attaches a handheld device to the canisters and triggers an unlock code. He exits the container and bumps into the yellow tie man. Schaeffer tells him that he only was securing the canisters, but yellow tie man is suspicious.

12:18 P.M.
Diane asks Audrey if she still has feelings for Jack. Audrey is shocked to learn that Jack still loves her. “If you don’t love him, let him go,” Diane cautions.

12:19 P.M.
Audrey calls Jack. She wants to know if he is coming back to her. Jack doesn’t know what he will do next. “I never stopped loving you, not for one second,” he says.

12:20 P.M.
Agent Pierce lets Logan know that they found Martha. Pierce tries to tell the President about Martha’s claims. Logan brushes this off as “conspiracy theories.”

12:21 P.M.
Logan wonders whether sending Martha away is the right solution. Cummings lets him know that Jack is coming to the retreat to meet with Novick. Jack plans to accuse Cummings of helping the terrorists acquire the nerve gas. Cummings then confesses to the President that he leaked information to the terrorists about the location of the nerve gas. Logan is outraged, but Cummings’ intent was to make the separatists think they will use it against the Russians. The nerve gas will never reach Russian soil because detonators will be triggered once the terrorists landed at their home base. This would prove the existence of weapons of mass destruction in Central Asia. It will allow America to increase its military presence in the area and guarantee the flow of oil.

12:23 P.M.
Logan calls Cummings a traitor for jeopardizing the country and going behind his back. He then realizes that Cummings gave the order to have Palmer killed. “That was an unfortunate, but necessary intervention,” Cummings explains. Logan demands that the operation be stopped, but it is too late because the man Cummings has working inside went dark. Cummings charges that if things don’t play out, Logan will be implicated and his Presidency will be destroyed. Logan is trapped.

12:29 P.M.
Novick meets Jack in secrecy, but a helicopter appears overhead and the agents order Jack to surrender. Novick swears that he didn’t tell anyone, and he yells to the Secret Service to stand down. The agents are under order from the President to arrest Jack. They handcuff him.

12:31 P.M.
With Jack now in custody, he was prevented from telling Novick anything. Cummings will make it look like Jack was leaking information of national security to Novick. Logan considers that others at CTU are aware of what Jack knows, but Cummings covered his bases so that the nerve gas explosion can’t be traced back to them. Logan demands assurance that the canisters will be destroyed before reaching Russian soil. Cummings wants the President to grant him the authority to remove CTU from the investigation. Logan helplessly gives him the power.

12:33 P.M.
Martha tries contacting Logan, but he ignores her.

The Secret Service brings Jack and Novick to the main building of the retreat. Agent Pierce makes eye contact with Jack, and questions an underling why Jack was arrested. The agent says that Cummings directed it.

12:34 P.M.
CTU is confused when it is pulled off the terrorist investigation. The President won’t take McGill’s call, and both Jack and Novick are unreachable. Buchanan senses that something is wrong and he suggests they disregard the order. McGill refuses, and Buchanan demeans his experience and says that is because he doesn’t know any better. McGill calmly asks Buchanan to step outside. Buchanan apologies to McGill for being out of line, but he still stands by his recommendation. Buchanan advises him to make decisions faster. They need to do everything they can to stop the terrorists. McGill agrees to disregard the White House order.

12:35 P.M.
Evelyn packs for the First Lady. Martha wonders aloud what happened with her relationship with Logan. She used to be his closest confidante.

12:36 P.M.
Agent Pierce comes in the holding room to move Jack to a detention facility. Jack tries appealing to Pierce’s friendship with Palmer. He explains that Palmer was killed because he was about to expose Cummings of helping the terrorists attack. It was Cummings who ordered the assassination of Palmer. Pierce says that the First Lady also believes someone inside the Administration was involved. Jack implores him to protect the President because a coup d’etat is going on. Jack begs Pierce for help.

12:43 P.M.
Pierce has a subordinate agent radio in that Jack has escaped.

12:44 P.M.
Cummings gets word that CTU hasn’t stopped working on the terrorist crisis. He urges the President to call McGill off. Suddenly, Pierce enters with Jack. Jack accuses Cummings of working against the country. Cummings tries to flee but Jack pummels him. Logan urges Pierce to intervene, but Pierce says he is only protecting the President. Jack lays out all of Cummings’ crimes, including leaking the nerve gas and the killing of Palmer. “I know about that,” Logan explains to Jack’s horror. Jack draws a knife to Cummings’ face and threatens to cut out each eye in order to get him to confess where the nerve gas is. Knowing Jack’s penchant for torture, Cummings gives up that the nerve gas is hidden on a boat from Long Beach.

12:45 P.M.
Jack calls Buchanan and puts Logan on speaker phone. He lays out the details of the shipment. Logan confirms for Buchanan that CTU should take lead on the investigation.

12:46 P.M.
Jack places his badge on the table and offers to turn himself in to the authorities. Pierce does the same. Logan orders Pierce to take back his shield and get Cummings out of his sight.

12:47 P.M.
Logan explains to Jack how he was coerced. Cummings had lied to him and said it was too late. Yet the international issues from the previous year are still pressing. “The fact that you’re alive presents problems for both of us,” Logan says. Jack’s only intention was to find Palmer’s killer. He wants to see the terrorist threat through, but promises to disappear once it’s done. Logan is satisfied, and then shakes his hand, thanking him.

12:53 P.M.
Evelyn puts Martha in a car, but a Secret Service agent stops her before she can drive off. Logan comes to retrieve her, and tells her that she was right about the conspiracy. He explains that Cummings lied to him and convinced him to send her to the clinic. She is still angry that Logan went along with it. Logan is pulled away by an aide, and he kisses his wife softly on the cheek.

12:55 P.M.
Chloe finds information on the only ship leaving for Central Asia. Edgar narrows down which container the nerve gas could be in.

12:56 P.M.
Buchanan sends Jack an image of the yellow tie man, whose real name is Ivan Erwich. He was a chemical engineer who joined his country’s separatist movement. Buchanan wants Jack to ID him for the strike team.

12:57 P.M.
CTU and the President watch the feed from the strike team at the port. The gas mask-wearing agents raid the container. They find a dead Schaeffer. The canisters are gone from their holding bins.

12:58 P.M.
Jack has Cummings brought back in to see the video. Cummings swears that he doesn’t know what happened to the canisters. Cummings identifies Schaeffer as his inside man. “They must know,” Cummings says.

12:59 P.M.
Cummings’ cell phone rings, and he sees that it’s Schaeffer’s number. Jack has CTU monitor the call and he makes Cummings answer. It’s Erwich, the yellow tie man, who says that Schaeffer confessed everything. Cummings tells Erwich that this was an unsanctioned act and that no one else, including the President, was involved. “Your country is about to pay a very steep price,” Erwich warns.